Back to other Cement Projects

A North American cement facility was experiencing excessive spillage and dust issues in addition to insufficient flow of material at load zone areas. One year before the Benetech project, the plant had installed a new enclosure on the clinker and cement feed belt.

Material continued spilling throughout the load zone area and the entire belt because of the material type and belt length. Spillage in the load zone area caused the track take-ups to seize due to material build-up. Which, in turn, caused the belt to miss-track. The spillage along the belt length also seized up idlers and tracker trainers. Resulting in significant loss of material and daily downtime of production for cleaning and unwarranted maintenance. Benetech came to assess the situation and provide an engineered solution to alleviate the spillage, dusting, material loading problems and ultimately create a safer, easier-to-maintain system work environment.

Benetech recommended the MaxZone Modular Skirtboard and Belt Support system to control the dust and spillage. First, Benetech had the existing skirt system removed and a 40-foot MaxZone installed. The MaxZone containment system includes four inspection doors, tracker trainers, a V-Plow, dust curtains, idlers, sealing skirt rubber with quick-release clamps, and externally adjustable, internal wearliners. Next,  the peaked hoods were installed because of the load-out belt above and the dusting and spillage issues it had. This allowed the spillage above to shed off the bottom MaxZone and away from the bottom belt, so no more idlers and trackers were seizing up, resulting in less downtime. Next, Benetech had an extended tail box added, and the entire loading zone was sealed, correcting the take-up spillage. This allowed the take-up to keep the correct tension on the belt. Finally, Benetech modified the existing chute to bring it down closer to the belt to address the improper material flow. Thus, allowing the material to be loaded on the belt gently, reducing the amount of dust and spillage caused by the prior harsh impact.

Overall, the Benetech solution successfully reduced spillage, dust, and maintenance/clean-up hours. Benetech’s MaxZone system was successful for the plant; the customer ordered another MaxZone for a second troubled belt. 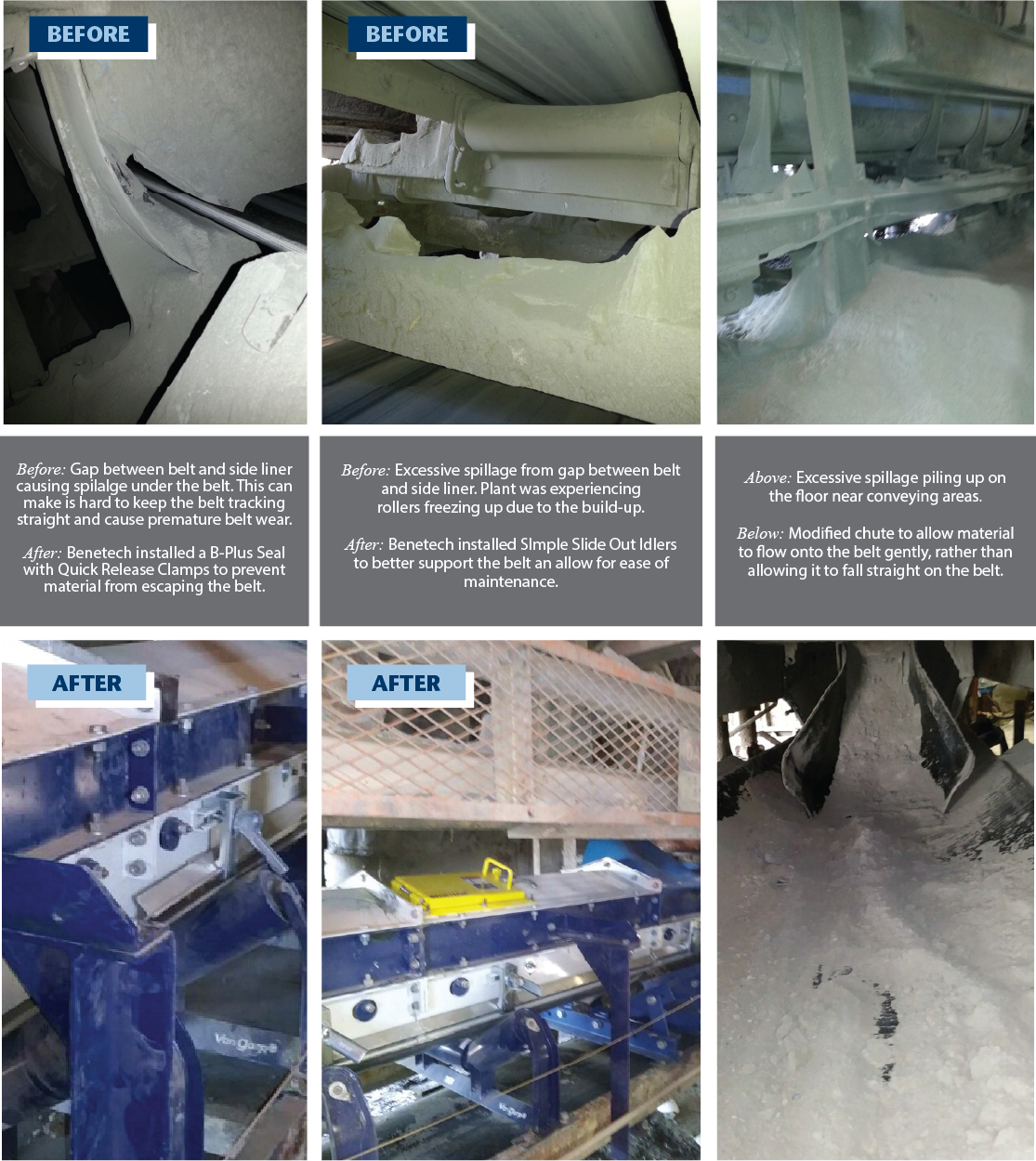